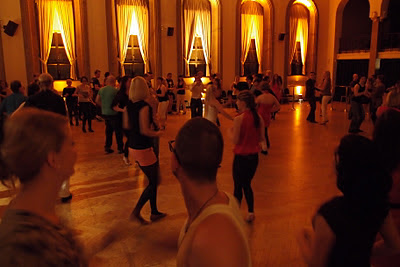 We started off with seven couples and after the first two songs two couples were eliminated. I got partnered with one of our top guys Mikko on the first song and Reino on the second. I was super nervous to be there on the stage. The songs went quickly and had no time to think or look around, just 100% focused on keeping the connection with the partner. When it came the time to eliminate the first two guys and girls I had no idea where I stood amongs the competitors... and was so happy to hear my number being called to the second round!!

Videos of round one: 1st song and 2nd song.

On the second round we chose again new partners, one that we hadn't danced with on the first two songs. I got a chance to snag my dance partner Jaakko and saw that also others quickly took their regular dance partners. I could finally relax a bit in the familiar arms and gained a bit more stability & confidence in my steps and could focus a bit more on the styling. Jaakko did a great job and was sad the song ended so quickly!

Then there was another partner change and another 2-minute song - the tension was in the air as everyone wanted to show the judges and the cheering audience their best zouk moves!

Video of the round two, 3rd and 4th song.

When the second round ended I was feeling pretty good about the dance but I knew I didn't manage to reach my absolute best. And more importantly, I knew very well I was up against some tough competition! When they announced that only two girls and two guys will move on to the final round I was sure that my game was up. So you could imagine my excitement when my number was called first!!! And to top that off also my dance partner made it to the finals!! Of course we would be up against my favourite dance couple Julia and Mikko and personally I knew I didn't have a chance to beat Julia whose superb zouk style I simply adore... so I was just going to have fun and dance my heart out!

On the final round we would dance two 2-minute songs, one with both partners. Well, I could have danced with Julia as well, she knows how to lead too, haha!! But yes, we opted dancing with our regular partners first, me with Jaakko and Julia with Mikko. I felt the song with Jaakko went well and frankly was just enjoying the music, every second of it! I got some thumbs up from other latin dance teachers in the audience which really warmed my heart. I did ok with Mikko on the second song too but fumbled a bit here and there, nothing big.. and still I was just focused on the connection and enjoying the moment... Less than one year of zouk and my first dance competition and I'm at the finals with the whole crowd smiling and cheering us :)

The final round video: 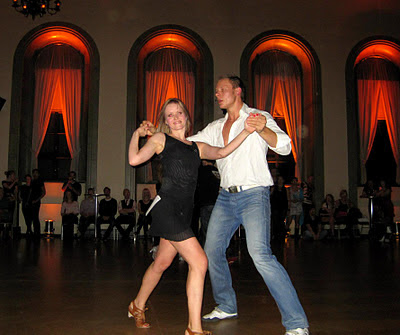 Me all smiles! Why? Making it to the final round, great music and the best dance partner! :) 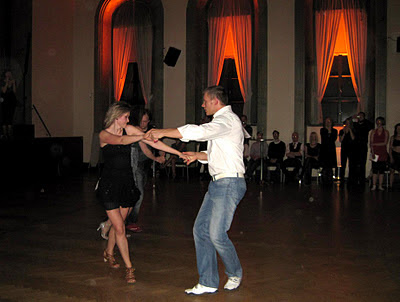 Burning the floor on the final round! - Photos from "Brazilian Zouk in Finland" Facebook page.

The competition ended with me sweating all over, I knew I had gave it my all!! We had to wait until the end of all the competitions for the results but I was just beaming of the fact I - and my dance partner - did so well!! Maybe all this practice, practice, practice we've been doing is paying off? After zouk there was a kizomba,bachata, rueda, crossbody and cuban salsa and showcase competitions.

The zoukers collectively did actually a pretty good job on recruiting a large number of competitors since only the bachata competition had one more couple participating - a pretty darn good job since we are the newest of the bunch in Finland, I'm so proud of our zouk gang!!! The cuban salsa competition had only three couples, what's up with that?? The zouk competition was the only true freestyle competition, in the others people were dancing with their own partners. Both competition systems have their particular challenges and advantages - I think the Jack & Jill style is a fun way to compete!

There were some more elaborate trics (I'd even call some of them aerials) in the bachata rounds. Well, I love bachata too, the music has lots of nice twists to it and the dance is really hot! ;) And I got to cheer some good friends on that competition! 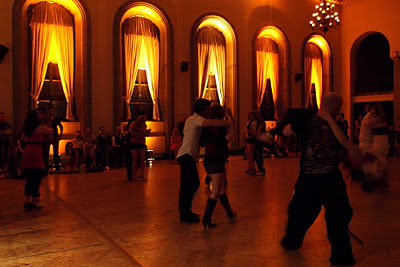 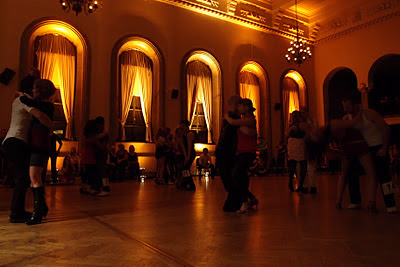 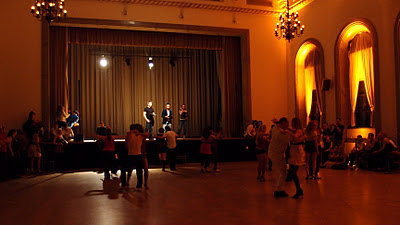 But frankly the most elaborate and truly impressive competitors were in the showcase category. There were only three groups that took part in that category but all of them had really put an effort on creating cool shows! Especially I liked the RockUrock show (spoiler: which won that category), there's a fuzzy video on youtube which doesn't really do them or their costumes credit. 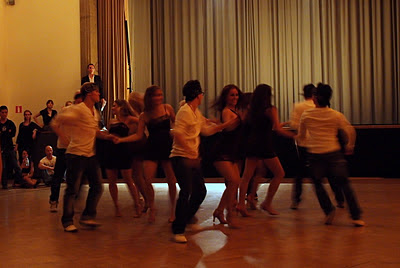 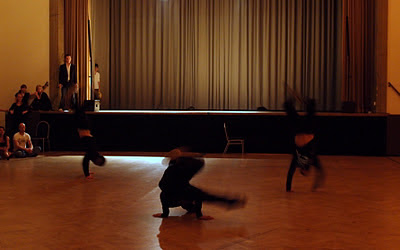 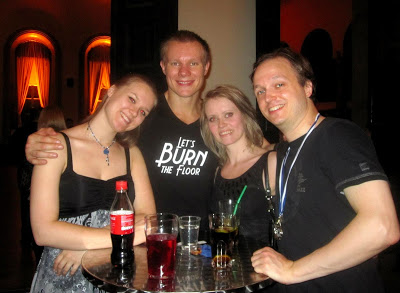 When it finally was the time to announce the results I wasn't too nervous. My placement on the final two was a big victory for me already. Like I had suspected, Julia deservedly won the zouk ladies :) And ... drumroll please ... my dance partner Jaakko won for the men!!! I was extatic!! :) I'm so proud to have the best zouk dance partner in Finland! We've come a long way since we started zouk this March.

The evening continued with lots of congratulations, big smiles and some fun zouks and bachatas on the dance floor. There were some cool shows as well! But it was an early night home after all the excitement... And already looking forward to the next year!!! ;)

Have you competed, how did it go?
Share your stories!