San Cristobal de las Casas is a town in the Chiapas region mountains, located 2000m above sea level. I took a whirlwind minicab ride to San Cristobal from the Palenque jungle and was greeted by a cold cold night air upon arrival. I wouldn’t say I was delighted to be there, tired from the jerky ride, arriving to a dark, wet and cold little town. After a long walk through town (thinking ‘ok, the pedestrian street and the restaurants look nice’) I got to my hostel, took a hot shower and collapsed to my bed.

The morning was even colder than the night and I was in shock – I want back to the beach, NOW! I decided to give the city a try and went out for a walk wearing basically all of the clothes I could think of, luckily all my warmest clothes were clean! And I could finally give the all the sand, sea and sweat covered clothes to the hostel laundry for a proper washing. Before 9am it was still nicely cool out and I was enjoying my ski pants. But suddenly, some point between 10 -11 it was so hot I couldn’t take my clothes off fast enough. The sun was really piercing! First looking for the sun and now looking for the shades, I continued through the town. There were lots of lovely pedestrian streets with shops of beautiful local handcrafted clothes, bags, woodcarvings, clay animals, Zapatista dolls. The area seemed to be full of artisans and artists! 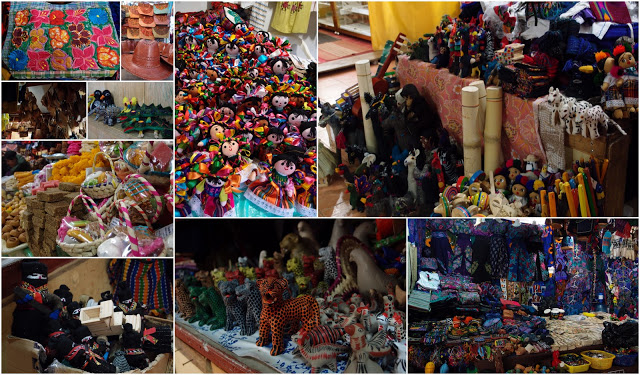 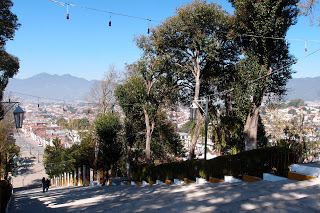 There are two churches on the hills on two opposite sides of the town, Iglesia de Guadalupe and Iglesia de San Cristobal (and many many other churches too…). From both hills there are nice views of the town and its mountainous surroundings. I walked to both on the first day I was there, the mountain air might have been slowing my step but it was nice to walk in the cool air.

In the evening I met up with an English couple I had met in Merida and we went out for drinks. We got a Canadian guy Nick to join us and I continued my mission of finding a salsa club. 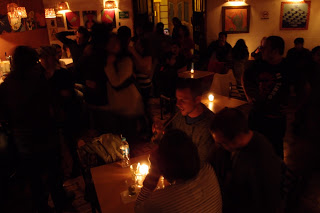 And wasn’t too hard to find a place to dance; right on the pedestrian street “20 of November”, along with all the other bars, was a salsa club Zirko (in the corner of “5 of March”). Lots of people dancing and after 10.30pm there was a tropical dance number and the band started with some live salsa & merengue – wohoo, success!

I was brave enough to ask a local salsero to dance with me and though it didn’t go too well for me (‘where’s the 1.. what foot am I on?’) I was happy I did it since after that I didn’t have to (or get to) sit down once for the rest of the evening!! Just as I finished a dance with one guy another one would come ask me to dance.. WOW, that was fun! There seemed to be only good dancers there, both doing the LA and Cuban style. I was disappointed that I wasn’t feeling too well so I had to go to bed earlier than I would have liked to. But was a really fun night, meeting some “old friends” and making new ones, and getting my salsa on!

The next day was a really slow one – I spent first the night and then the day in bed with stomach problems. First ones on my trip! As soon as I stopped eating Mexican food… Luckily it wasn’t too awful and was out on the late afternoon to get some fruits and went to meet up with my new friend Nick in the evening. Together with some Australian girls from Nick’s hostel we all went out for a nice dinner. A quiet day for a while, why not!

Christmas came to San Cristobal on Dec 24th no matter even if for me it still didn’t feel at all like Christmas. The decorations, the carols (mostly those I heard sounded like the ones you hear if you open a tacky Christmas card), Christmas trees – and there were even real pine trees in San Cristobal – didn’t make me feel anything like Christmas, in a way I feel at home. And that was a good thing, I didn’t want to start pining back to Finland!

I don’t know how much the holidays affected the Mexican lives but there sure were tons of people out on the streets every day. And all the shops, stalls, food vendors, cafes and restaurants were open all through the Christmas Eve (and through the entire holiday season!).

My San Cristobal buddies & I left to see a closeby village of San Juan Chamula. San Juan Chamula is a mysterious and very traditional poor village up from San Cristobal. In the middle of the town, 2200m above the sea, you’ll find one of the funkiest churches I could ever imagine. It was a great time to visit it on Christmas eve! The church itself was a beautiful big white building with green and blue ornaments surrounding the massive wooden door. The floor was covered in long pine needles all over with the exception of small areas which people cleared to place sets of thin candles. When we entered the church there was a group of people dressed in traditional clothing, some looking more like a old fashioned cattle rancher, some wearing something like a military uniform and ladies in their traditional dresses. All chanting their own prayers. 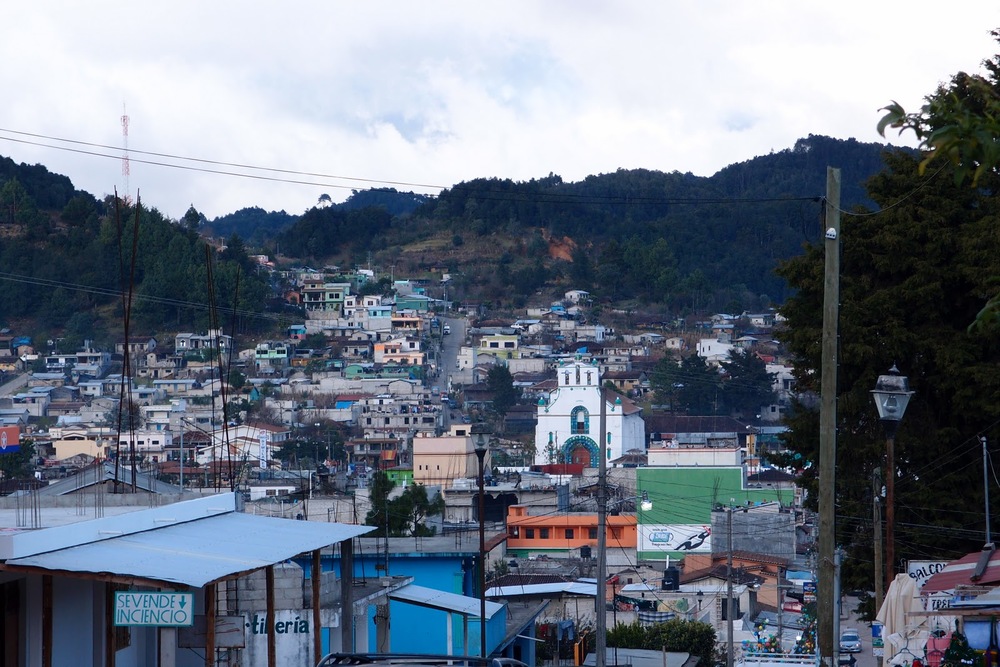 The only picture I took from San Juan Chamula - no photography in town or especially in the church to respect the locals. The church is in the middle.

The sides of the churches were lined with carved wooden boxes that housed statues of different saints, altogether there were more than 20 of them. In front of all of these there were wooden tables with large vases of live flowers and tens of candles. So the whole church was lined with twinkling candles, all over. The church was filled with live flowers too, colorful large arrangements hanging from the high ceiling, along with strips of flower-print canvases with fringes, looking like some 70s curtains. People were standing and sitting on the floor, lighting more candles, praying, feeding their children. One guy in his traditional “cattle rancher” outfit came up to me – “Hola. Hi! How’re you doing?” So surprising to hear English there!

The altar was the most bizarre of all, covered all around with palm leaves, pine braches, citrus tree branches, all draped in Christmas decorations and different color balloons (!) in layers and layers, filling the altar surroundings up to the roof. The altar itself was covered in Las Vegas type Christmas lights, blinking and changing colors. A Christmas medley was bleeping mechanically in the background, along with a praying family’s chants. You could smell the pine needles and incents. It was the weirdest combination!

We took a walk in the village and were instantly followed by a number of begging children. “Un peso, un peso, para mi tortilla”. Or old ladies selling their hand crafted dolls or clothes. People are still very polite. Dogs are everywhere (like all over Mexico so far), looking happy and sad at the same time – and they stay clear from people. There was also a big Coca Cola warehouse in the tiny poor village.. the strangest things.

The Christmas eve night we’d decided to spend with our big multicultural group in Entropia, tiny French restaurant in San Cristobal. We took a long time with the French owner to arrange the various tables so that we all could fit, practically filled the entire place. “It’s beginning to feel a lot like Christmas”. 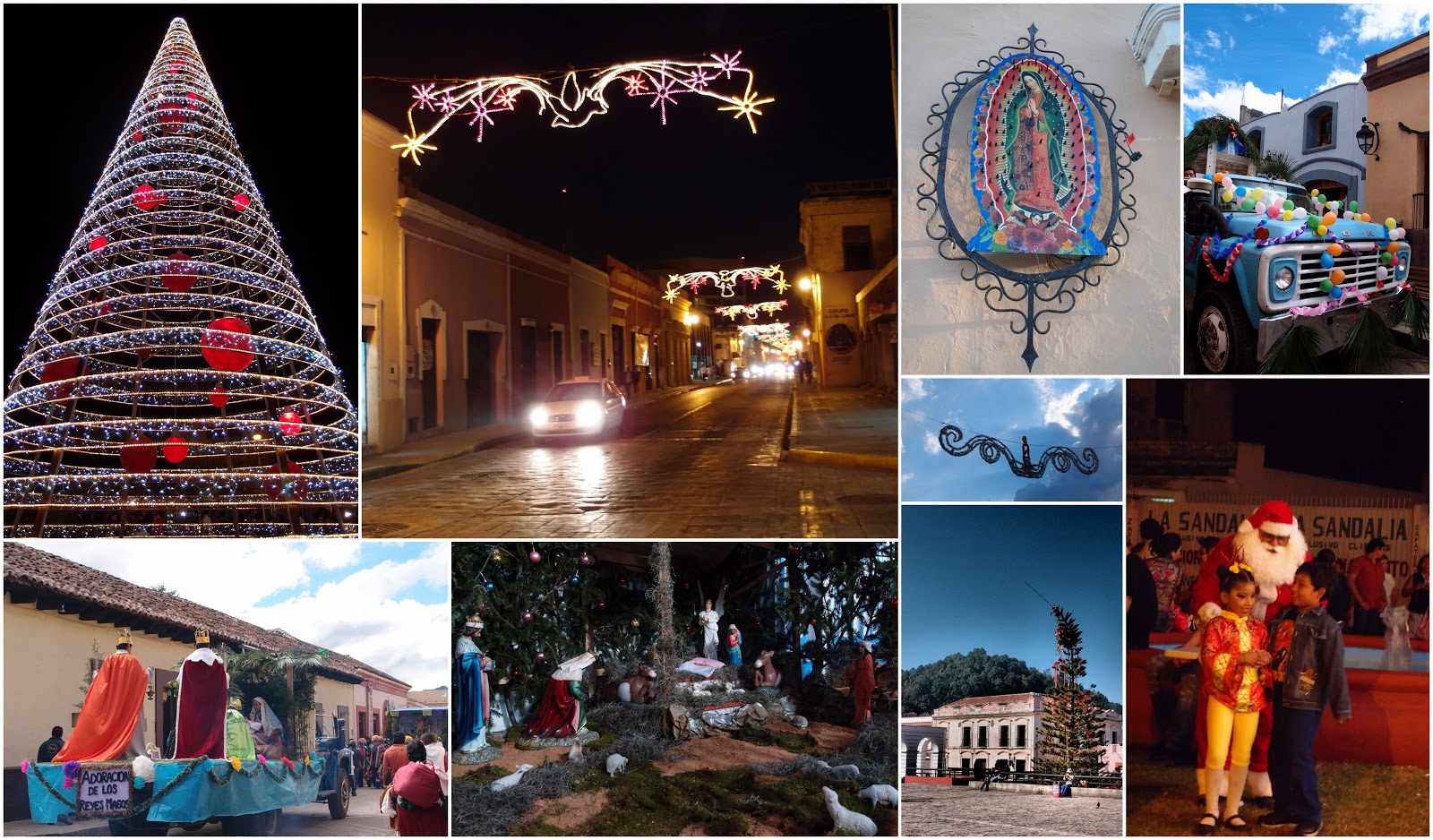 A collage of my "Christmas stuff in Mexico"

The food was lovely, we had brought some wine and the company was fantastic! The dinner ended with a tricky but hilarious music quiz! We left the restaurant to the nearby hostel for drinks and to break the piñata which the lovely Australian girls had gotten for us. We all got to have a crack at it – wasn’t easy to hit it, let alone break it! Then out to the street for some sparklers and firecrackers, and on to the club where we (believe it or not, on Christmas eve) danced the night away, literally! I got back to my hostel just before 6am.

Despite spending some time sick San Cristobal was turning out to be nice place – fun people, lots of cool things to see and shop, lots of nice cafés and restaurants with cuisine from all around the world, excellent people watching. And the town still retains some of the local character (which is missing from the newly built coast). Was easy to see why so many travelers like the place, and why many seemed to have stayed there.