Brazil... Carnaval... I certainly wasn't going to miss a samba parade at the local Florianópolis sambódromo! The main parade on Saturday was sold out by the time I got in town on Friday so I got a ticket to the next best thing, the final parade - the champions’ parade held the following Tuesday.

And I made sure I was there early. The parades are at the Floripa samba street, sambódromo (yes, they have one too, like in Rio). It’s like a sports stadium but with one straight white concrete alley. It's a funny concept to have a stadium for basically a couple events per year (or do they actually use it for something else too?) but in the Brazilian mindset it might be just the thing. 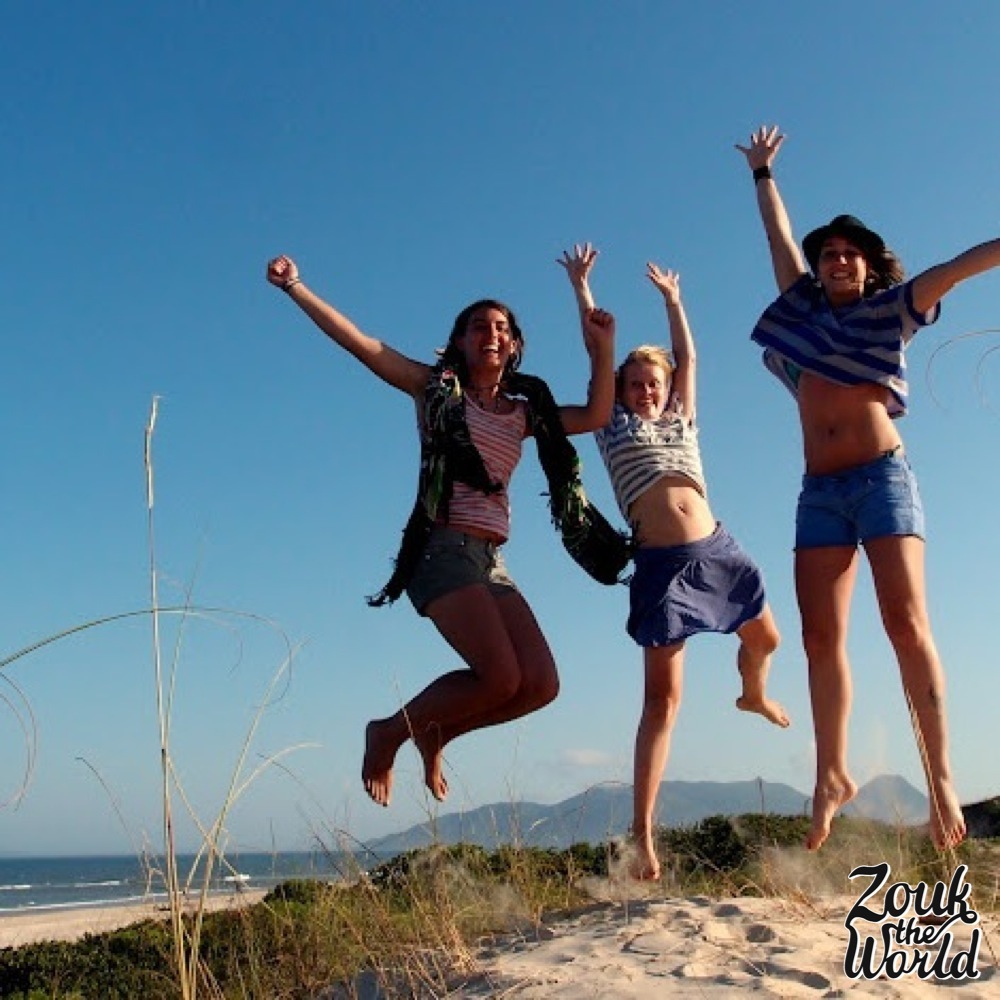 When I came to the sambódromo at around 7 pm there was just a handful of people in the audience and even when the first parade groups started at around 8pm it was mostly empty. I didn't mind, I was having too much fun cheering to the dancers and taking pictures of all the fabulous costumes and floats! I didn’t even notice that the whole area filled up to the brim by midnight! And I didn’t have to be there for long until I attracted new friends, a huge group of Israelis adopted me. I really didn’t follow what the program was since all the announcements were in Portuguese – but who cares as long as the cheering dancers kept rolling pass me.

The most impressive things in the parade? There were lots of them: the young dancers really knew the samba moves, even the kids. The passistas (solo dancers) obviously had worked on their samba no pé since they were kids and it was fun to watch them when they really kicked in the high gear. The mestre salas (the male dancer in the flag duo) were spinning like crazy! And I loved how smoothly the male solo dancers do the samba no pé. There were lots of groups with precise choreographies, really long ones… I paid attention to a couple of the groups and felt that I didn’t even see them repeat the sequence in the entire time they passed me (which usually would take longer than one run of their enredo). The baterias (the bands) were massive and I think they were the groups that really got the crowd going. 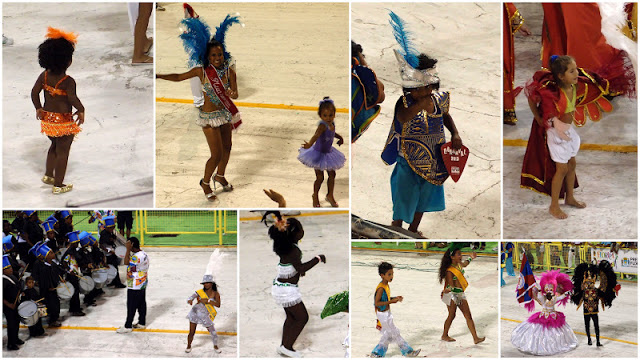 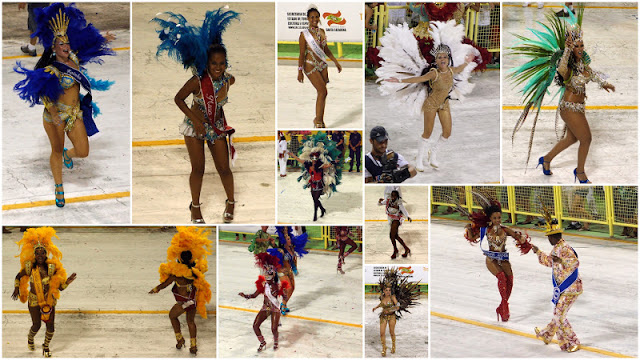 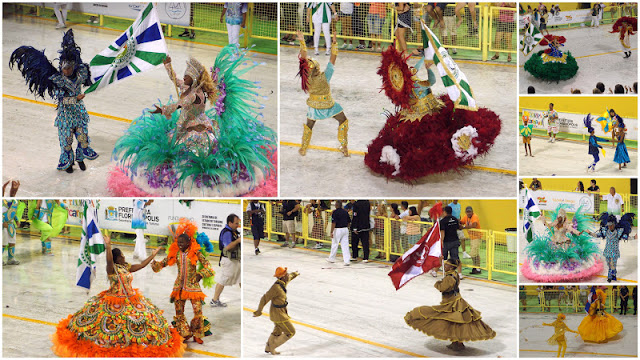 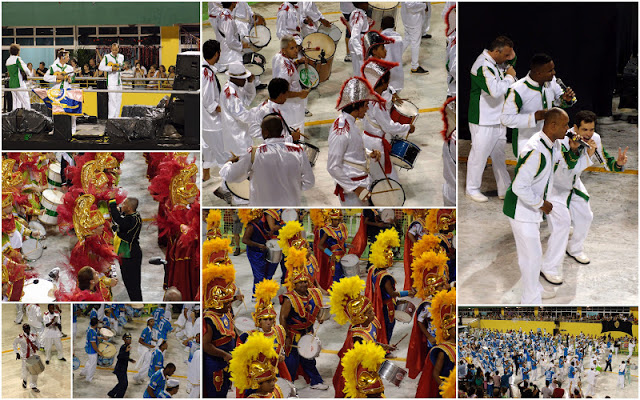 The costumes were of course great - not as extravagant as the ones I've seen in pictures from Rio but close. But as there were soooo many dancers and groups you got to see a crazy amount of costumes in one night. There seemed to be more than 10 groups of alas with one school, some alas were around 20 dancers, some about a hundred. Some of them were in bigger costumes and were just jumping around but then there were lots of alas with smaller suits and they did samba no pé as well. The porta bandeiras (the girls that carry the flag) had really beautiful costumes and many of them had lots of feathers in the bottom part too. Everybody was singing (the crowds too - and we got a cardboard fan that had all the enredos on it). The songs really reminded me of those we have in Finland, we’ve really adopted the Brazilian style! 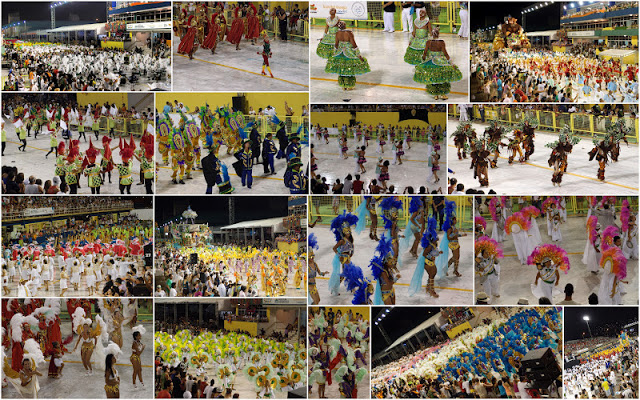 The floats…. they were huge! I felt a bit scared for the dancers that were on the top! (And I saw later how they got out, with a crane lift!!) They must have a very good building crew to make it steady – and of course it helps that you can wheel the floats on a straight, smooth street. They liked to have moving parts in the structures: boats that rock, a pyramid that opens etc. I was impressed! There were lots of male dancers on them too! Was funny to see the guys in big feather costumes (but I shouldn’t be surprised about the cross-dressing Brazilian dudes anymore). 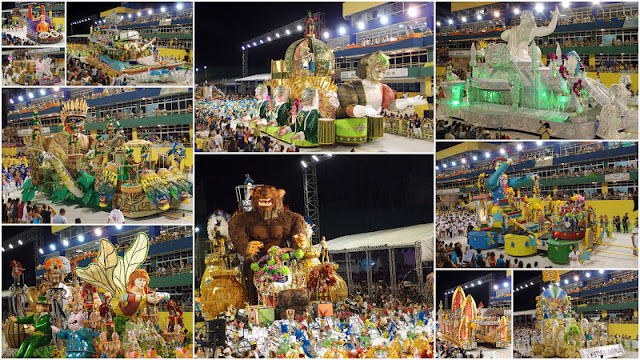 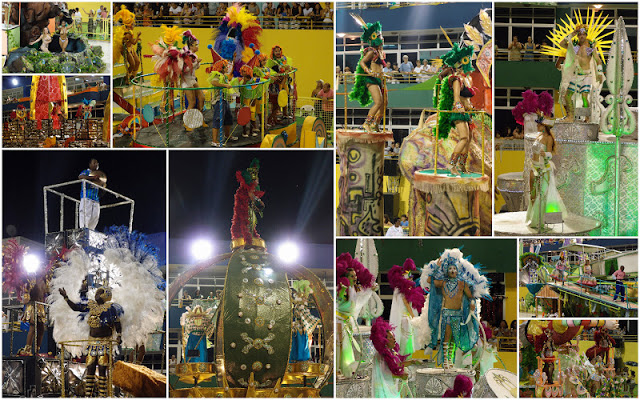 The practicalities: get your tickets early, especially for the Saturday parade. If you’re in town you’ll find a Tourist Info stand in the main street where they sell all the tickets. In Floripa the ticket prices were 10-50 reais, I got the cheapest one (there were a couple of blocks to choose from) and I was perfectly fine.

The whole event took about 7 hours, the first groups on the sambódromo started at around 8pm and the last finished at 3am. There’s food and drinks in the sambódromo, even people walking around in the audience selling everything from snacks to water and caipirinhas.

If you want to see all the shows and have some privacy (and I think drinks and snacks too) you could buy a pass the camarotes. It looks like a hotel on the side of the samba street, pasarella, and you’ll see the parade from your balcony and pay 250 reais for 4 parades. Wouldn’t be a bad deal if you could also sleep there :D I managed to bus in to town and there was a bus that left back to the island in the middle of the night after the parade so no worries about transport.

The official program of the champions’ parade at the Passarela do Samba Nego Quirido, the Sambódromo of Florianópolis:

The results of the Saturday’s parade: