After lovely four days at the Titicaca lake I got on the morning bus from Copacabana (Bolivia) to Cusco (Perú), on my way to Machu Picchu. I had read about all the various complications travelers had had on this particular journey (extra bus changes, unsafe buses etc) so I was praying for the best. It seemed there wasn’t too much choice and it was hard to find reliable information about the trip so I just bought a ticket to the 9am bus – after asking in three different ways about how many times I need to change the bus (to which I was told just once, in Puno). I found out my travel friend Christine was going to be on the same bus, it was fun to meet here since we parted ways at the Iguazu falls!

We left at 9am from Copacabana and just about half an hour later we were already at the Bolivian/Peruvian border. We got back to the bus after the standard (but fast) border formalities and continued on. Suddenly we were making an extra change in a town called Jumica and got told we’d have to wait a half an hour for the bus to Puno. The locals were laughing about the half an hour wait and in fact it turned out to be close to two hours before our bus arrived: Us and what felt like 100 Bolivians or Peruvians with a truckload of luggage (each) crammed on the same bus, pushing and shoving the tiny bus corridor. Then another change in Puno and I was exhausted… at least there we didn’t have to wait for long but it also meant we had pretty much no time to get anything to eat. Also the ATMs didn’t work in the Puno station so I went to change my remaining bolivianos in the currency exchange / pharmacy so I could pay the departure tax (which seems to be the norm in all the Peruvian bus stations: 1-2 soles).

Tired, hungry and annoyed by all the extra stops we were finally in the bus that would take us to Cusco. What saved me from total desperation was the good company: Christine and also a group of Argentinians who were helpful in understanding what was going during the trip. Finally, after the very shabby looking border regions and Puno, the views started to get spectacular about three-four hours after Puno. The road goes between velvety green hills and farms on the left and snow topped mountains on the right. So finally I was in the beautiful Perú! After having left at 9am we arrived at around 8.30pm local time to Cusco. The lights / the power was out and frankly it looked like we are arriving to an abandoned city… But when we got off the bus the city was back alive, in lights. I was happy to get to my nice hostel, take a hot shower and go to bed. I even had wifi in my room so I could chat with my friends, just lying under my blanket :)

The next morning the first thing on my agenda was to make sure I had a ticket to Machu Picchu. I actually thought I had bought a ticket online but when I checked to make sure that morning it turned out the payment hadn’t gone through and I had none!! So it was off to find the ticket office (Ministry of Culture, INIC) in Cusco and hope for the best! I had booked my train tickets so that I had two and a half days at Aguas Calientes (Machu Picchu Pueblo, just a short bus ride from the site) but I was hoping to get a ticket for one specific day. It took a little bit of looking around to find the office but I was there around 10am and lined up.

And yes:I got one of the last nine tickets! That was pretty close.... Well, there were still a couple other options but I happy I got just the ticket I was looking for!

I had two days to wander in Cusco before the Machu Picchu trip so enough time to look around the main sights, do some shopping and also have lunch & dinner with Christine before she left on a trek. Cusco is beautiful both day and night – I heard the nightlife is pretty good but I was so tired both nights I was just happy to get to bed after dinner. But during the day I covered most of the downtown – lots of impressive churches, pristine plazas, wide avenues, souvenir & clothes shops of all types (and for all wallets). 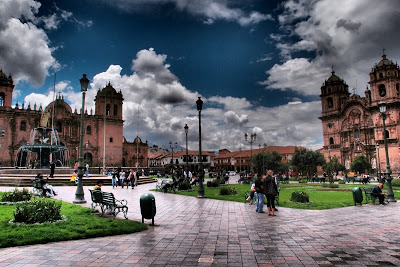 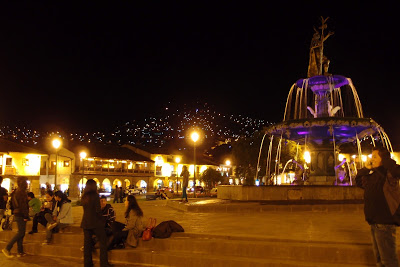 As usual, when you step a bit out of the most touristy are you’ll find lots of interesting things too: I could recommend a lovely restaurant - Don Mateo at Pumacahua 200 – looks like it’s only open for lunch or maybe I was just unlucky that one night I tried to also go for dinner. Lunch menu (starter, soup and main course + a drink) 8 soles – mains on the a la carte 15-25 soles ( in the center menus go for 15 soles and up, mains on the a la carte from 25 and up). All the food was really well made, stylish portions, great service and nice athmosphere.

After spending almost three days in Aguas Calientes I came back to Cusco for one more day. I didn't have anything particular I was dying to do so just decided to walk around and see what I come up with. My shoes were in dire condition so it was a perfect opportunity to support one local shoe shine boy - and even just in a couple minutes he did some miracles and my shoes had never been that shiny!

Since I had some extra time I wondered off to the top of the hill beside Cusco to see the Sacsayhuaman ruins and the Cristo Blanco (it costs 70 soles to enter the Sacsayhuaman or you can also buy tourist ticket that gets you in several sites in Cusco for 130 soles). The Christ lays on the same area, on top of the hills but is outside the ruins (no need to pay to get there although you may need a car to come to there from the other side of the hill).

After Machu Picchu I didn't find the ruins that interesting but it was a good way to spend a sunny day. For some reason my feet were really tired and by the end of the day I could barely lift them up. 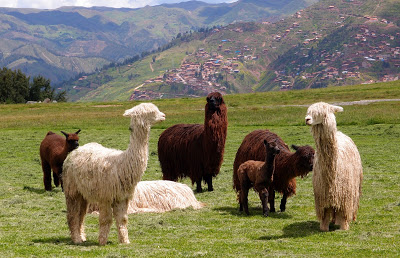 What would Peruvian ruins be without some alpacas? 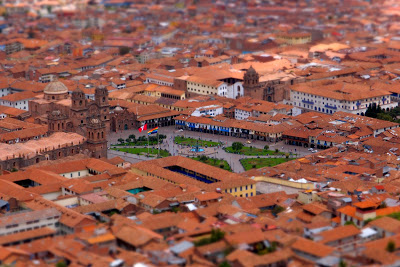 View of the Plaza de las Armas from the hill 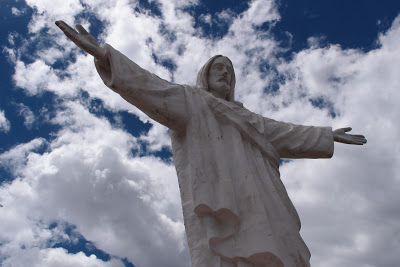 Cusco was lovely and after seeing some shabby towns like Puno on the way there I'd say it's a fairly nice place to be. Most people (and that's a lot of people every year) come there only to get to Machu Picchu so yes, it's very touristy but not in the worst way. But three days was enough, it was a good time to get on the overnight bus to southern Perú, Arequipa. --- But before about Arequipa, I'll write about Machu Picchu in my next post!