So after one night and two relaxing (boring) days in La Serena I was already ready to move on. I anyway needed to get a bit more south, towards Santiago. 7 hours south of La Serena was the Unesco Heritage site Valparaíso, just an hour and a half from Santiago, on the coast. I thought I might find more things to do there. I left La Serena on the last evening bus that was supposed to leave at 0.30am - but lucky us, our bus didn’t get to the bus terminal until 1.10am. I got settled in my seat and passed out within an instance. At around 7am I was already awake, worried that I’d miss my stop – though this time it was actually the final stop of the bus. At about 8am we were in Valparaíso.

I had booked two nights in a really lovely hostel quite close to the Valpo (=Valparaíso) bus terminal – at this point I had one week to go before my flight was leaving on the following Wednesday from Santiago to Auckland. I was quite happy to have made it this close well on time for the big flight. No need to hurry anymore! No more nightbuses! I was thinking if I should move to Santiago for the weekend but it turned out the whole city was booked: there was the Lollapalooza music festival on Saturday and a marathon on Sunday. The earliest I could find a nice hostel in Santiago was for Sunday so I figured I might as well stay the two extra days in Valpo and just get some rest, and maybe do some arrangements for the coming New Zealand leg of the trip. I definitely was desperate for some rest and quality sleep after spending three nights in the bus during the past week and god-know-how-many way too early wake ups in Perú before that.

Welcome to Valpo! Simmer down in the harbour - a short tour out with one of the lanchas will set you back around 1500 pesos.

Now I had four days to spend in Valpo... Doing, what? How about sleeping.. Eating… Sampling some Chilean wines. That sounded like a plan! I was happy to notice there were two big supermarkets quite close to the hostel so I went and stocked the fridge with groceries and cooked some nice Mexican food. I also took my clothes to the laundry and hand-washed all my wool clothes. I looked up what to do in New Zealand and got in touch with the Kiwi zoukers. And for the rest, yes, I slept a lot! 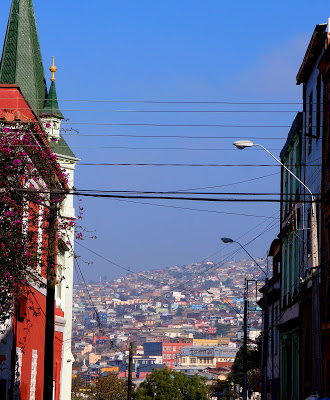 Reminds me a little bit of La Paz

I realised this was also as good time as any to join a walking tour of the city since it looked like I wasn’t motivated enough to do any sightseeing on my own. There was a highly recommended “tours for tips” walking tour that leaves every day at 10am and 3pm from Plaza Sotomayor. When I went to the tour meeting point I was expecting there to be a couple people, if even that, considering they do 14 tours every week... I was a bit skeptical how they manage to fill them up even in low season. But no worries about that, we were about 25 people on the tour. Our guide Al was a really funny American-Chilean guy who guided us around for a bit over three hours – one of the best guides I’ve come across on this trip! (And I can tell you he made a pretty handsome three hours salary just from the tips!!) 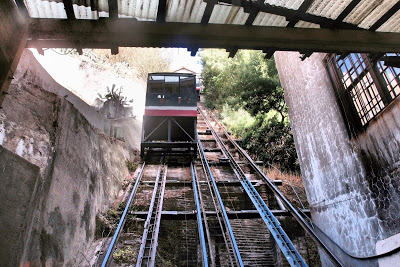 The elevators to the hills, Cerros 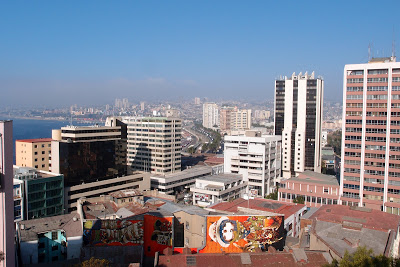 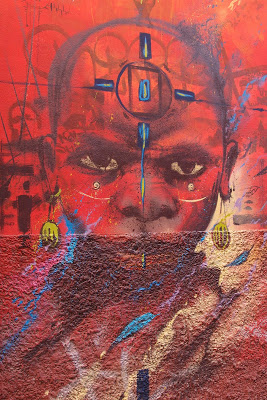 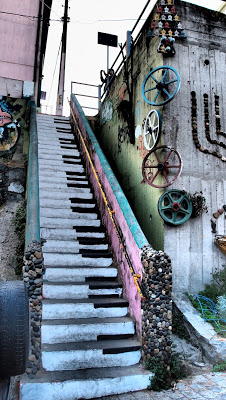 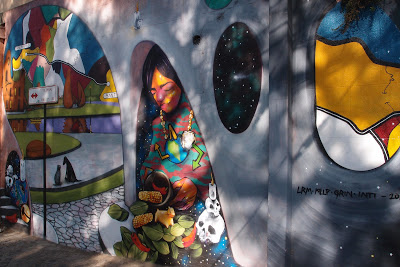 Valpo: the mecca of street art, these done by artist hired to clean up the graffiti-riden hills 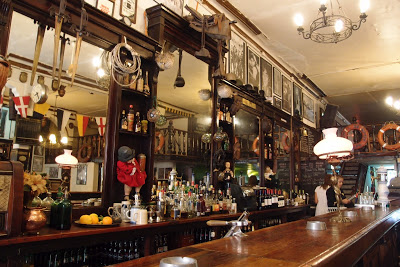 There were also some interesting stories Al told us during the tour (who knows how accurate, but all very entertaining. Firstly the city's name comes from one of the explorer's who felt the location reminded him of his home, a paradise valley - Valle Paraiso. The city had a pretty turbulent history, from the gold rush to the various economic downfalls that strongly hit this important harbour town - the latest one in the 1980's when the city was at some parts totally in the grips of various criminals.

I was curious to hear that the city's tens of different fire deparments are all completely run with volunteer firefighters - they fear that a salary would not be the best insentive requiting loyal workers for such a harsh job. Thus all the firefighters get no money for their important work and have to support themselves with other jobs. The stations are run with funds from donations and raffles. 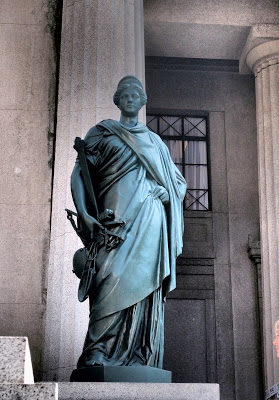 My name is Justicia and I don't give a crap...

Another - and the funniest story - was on the Lady Injustice statue. The version told by Al goes as followed: there was a man who had an affair with the judge's wife. Once the judge found out he framed the man for murder and sent him to jail. This was a rich British man and he used his fortunes to buy him out of the jail sentence and returned home. After a while he had the statue made: the famous "Justicia" except she was not blindfolded (as justice wasn't blind) and didn't hold up her scale to weight the rights and wrongs (since Chileans are "relaxed", i.e. lazy). He had the statue sent anonymously through France to Valparaíso to be place in front of the courthouse.

And there it stood for over half a century until one guy happen to pay a closer attention to the statue - knowing what the Lady Justice should really look like. So they put together a committee to decide what to do this mockery of their justice system - do we take it down and recognise that it took us over half a century to notice this blatant joke or do we keep it and live with our stupidity. The end result was that the statue stayed, with a notion that there is justice in the courthouse but no justice outside.... What a great statement!?! And what a funny story!

That night I decided I’d go look for a club to go dancing – and I got some people from the tour to join me. Following the information I got from the tour guide Al we headed to Av. Errázuriz 1298 where there is a lating club Cubanisimo. During the night they played bachata, salsa, reggaeton and cumbia about half of the time. The other half they play all kinds of pop music. There were lots of good dancers and I was having such a fun time being back on the dancefloor! I think it was also the first time I got to dance one of my favourites, bachata, on this entire trip! Unfortunately the guys there didn’t match up with the amazing bachata dancers we have in Finland – quite funny to say that but we have some really good ones!

Next to Valparaíso is another famous beach town - the slightly smaller Viña del Mar with more of a contemporary beach resort feel. It's only about ten minutes on the local bus from Valpo so went to have a look on the Saturday afternoon. It was a cloudy day and only later on the afternoon the sun came out (like every day in Valpo and La Serena). There wasn't too much to see or do really, but it was a welcome change of scenery after three days hanging around in the shabby Valpo.

Getting around in Valpo: At night it was very hard to get a taxi (ask a hostel or a restaurant to call a taxi) but collectivos are plenty - meaning pretty much every car you see is a collectivo. During the day you can take the buses, trolley buses, collectivos or the metro and also the elevators takes you to the hills. Be careful where you go: there are distinct areas which are not recommended (such as area starting one block south of Plaza Sotomayor, the fish market and some of the Cerros). There are pickpockets around and also plain muggings occur - and this is the first place where I heard first hand stories about petty thefts etc from other people in my hostel. I was safe there but I can admit that there were areas where you noticed right away that you shouldn't be there... not really anything threatening bu the kind of places where you just need to walk away asap. Ask the locals where to go and where not! Valparaíso is a bit rough around the edges but a cool place to visit if you're in the Santiago area!

Viña del Mar you can reach by taking any bus that says Viña or Libertad (440 pesos, 10 minutes) or the metro (you'll need too get an electronic card: 1500 pesos + around 600 for one way trip). Santiago on the other hand is about 1,5-2 hours away (around 3000 pesos for a bus ticket), buses leave several times every hour.