I guess I needed some rest after all the touring during my Argentina leg of the trip so I decided I wouldn’t do anything in Salta. And it worked out pretty well. I was responding to emails, making updates on my blog, arranging photos, booking a flight… ok so not totally relaxing. But it was nice to not have a set “day plan”, I just walked around in the city – and somehow always managed to do that during siesta. Salta really closes down for siesta, unlike some of the more “touristy” towns along my road. 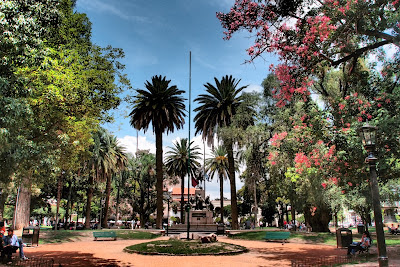 One of the prettiest parks I've seen, in the center of Salta 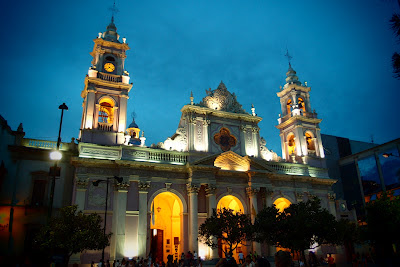 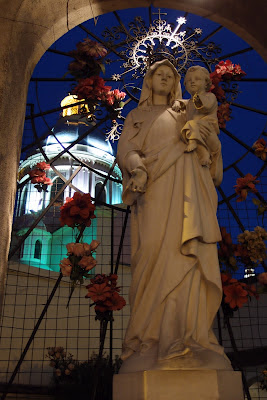 So the second day I was so bored already that I went into a museum. Also realized it was the first museum I had visited on my trip!! Museo de Alta Moñtanan is dedicated to the mummies that were found on the volcano Llullaillaco. The site was discovered in the 1980's and the mummies were brought down in 1999.

They were three children that were sacrificed and they were preserved due to the natural conditions in the high altitude. In the museum they display always one of the three mummies, this time it was the "lightning girl".

Human sacrifices are rare in the Inca culture but this did occur in times of importance, such as after the death of a ruler. The sacrifices were usually children of high social statute. Children were also important in building relations between the different Inca tribes, like the European royals back in the Middle Ages, two children from different tribes were wed to build a bond between two tribes.

The mountains are considered sacred by the Incas and so far over 200 locations (burial grounds or temples) have been found along the Inca paths on the Andes. Llullaillaco is the highest archaelogical site - the altitude brings lots of challenges in making discoveries like this. 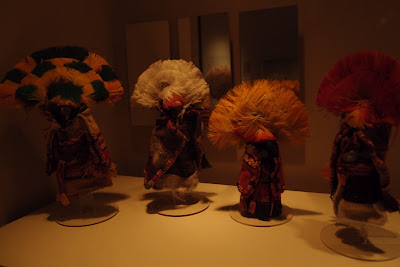 The children were buried with miniature dolls. These miniature dolls and objects were important in the Inca culture as the people believed that with them they could magically control the elements in the real world.

The museum was small but the exhibits were really well done with English descriptions, I can really recommend it! It gives a good idea of the Inca culture and I found it interesting to see especially the ancient objects that have the same style and patterns that you can see in the textiles all over the Latin American even today.

On my last night in Salta I had to sign up for the asado (Argentine BBQ) since it was my last night in Argentina! The asado was excellent, and also the cheapest so far (50 pesos, they’ve usually been 70 pesos). Lots of meat, chorizo, grilled vegetables and salad… yum! I’d also gotten a nice local wine from a Japanese girl in my room who didn’t want to carry it home with her, hehee lucky me. So the evening included a nice acoustic duet by two local (very cute, very tiny also) guys, they had great voices. And the whole set up was quite entertaining with all the flashy lights, I guess a nice cozy atmosphere is not what the locals are used to. After the dinner and the music an English and a Dutch couple and I played some cards (I lost handsomely – not money though) and by the time I got to bed I had about 3 hours to sleep before my 7 am flight. Flights actually, three of them. Made me question my judgement about booking trips… I had a long travel day ahead of me. 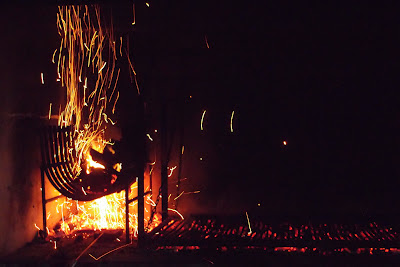 Setting up for the asado

Argentina was by far not high up on my interest list when I was planning this trip (or any trip) but I had heard it was beautiful. And that's about all I had heard. I had no idea how massive the country was - my eyes would mostly wonder on Brazil when looking at South America on a map.

Luckily it became a part of my trip and the more I spent time in Argentina and the more places I saw, the more I liked it. There are some many extremely beautiful places that I couldn't have imagined all of them, even each place on its own, such as the Iguazu Falls Beagle Channel, Perito Moreno, Cerro Llao Llao, Purmamarca or Salinas Grandes, really impressed me. The cities were lovely and felt safe (yes they'll say it's dangerous in Argentina but you really fooled me on that one), hostels were top notch. If you love steak and wine you'll enjoy your time. Any kind of outdoor and adventure sports are available. There's world class dancing in Buenos Aires. They speak Castellano (Spanish) kind of funny but you'll get used to it ;)

It won't be cheap. Sure you'll have the best steak and a great glass of wine for cheaper than back home but your wallet will be a lot thinner than you'd imagine after all the eating & drinking, tours & travelling... The distances are long so you'll be boarding long haul (20+ hours) buses or flights quite frequently. You can make a good deal on flights - a 20h bus ride will cost you around 100€ (cama, which means there are less seats, they're fairly wide and almost recline completely). A local bus is cheap, was never more than 0,5€. Hostel prices aren't that bad (around 11-15€ for a bed in a nice dorm), you'll eat a cheap bbq buffet or a steak in a nice restaurant for a bit over 10€ (or less eve), a beer is a bit over 1€. All round it's cheaper than in Brazil (more or less) but still far from the Mexican prices, which would be around one third or even less.

If I'd come back, I would definitely come to see more of Buenos Aires (one week is never enough for a world class capital city) and go zouk there for sure. I'd like to try the Tren de las Nubes (apparently an amazing train ride in high altitudes from Salta). More on the "maybe" section are - if I won the lottery - a boat to the Antarctic and I could come with a bunch a trekking gear and do more hiking in Patagonia. And surely more wine tasting, you can never do too much of that.. :D There's a nice list of things to add to my future travel dreams :)