The festival's schedule was simple: there was only one intermediate track and one beginners track, like last year. This is a pretty good concept in my opinion - the artists are what the attendees come to see and this way you won't miss any one them.

On the main (intermediate) track each artist couple had one workshop on Saturday and one on Sunday; six couples means six workshops per day (from 1-8pm). On Friday night there were also three workshops, introductions to Neo Zouk (by Mafie & Marina), MZouk (by Daniel & the Finnish Mzouker Ossi Kimmelma) and Rio Style (Renata & Jorge, Freddy & Andressa and Leo & Becky). All in all workshops were pretty packed as is usual in congresses but it was easy enough to follow the teachers. The spacious & nicely lit main hall worked well and people were in a great mood.

I only took out my camera a couple of times, I was just too busy enjoying the festival and socializing! So here are my only two (good) pictures of the event: 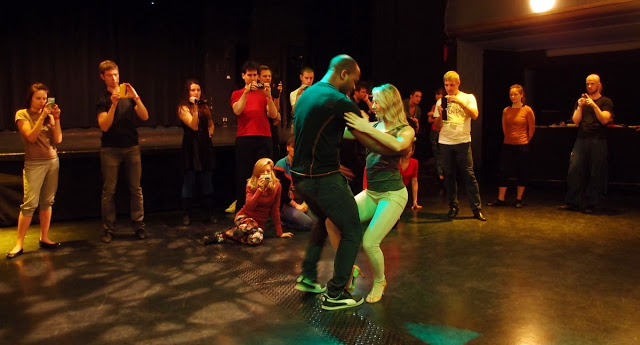 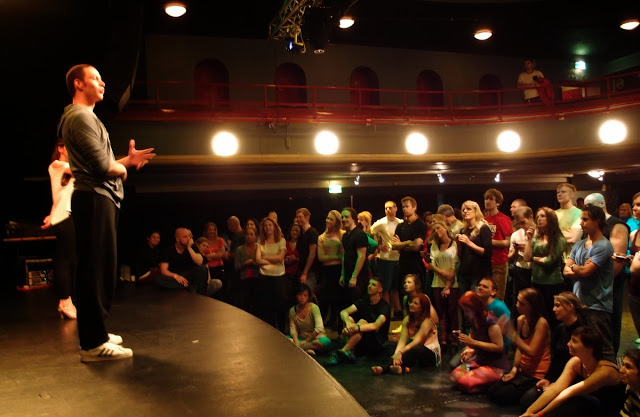 Bruno & Eglantine thanking us after their last workshop

Looking for the workshop demo videos? You can see them below in this Helsinki Zouk Festival 2013 playlist. The demo by Bruno and Eglantine, right at the start of Saturday was my favourite one.

The parties were in the same venue as the workshops and it served both equally well. Dancing started on Friday and Saturday 11pm and ended at 3:30am, with a break for shows at 1am; on Sunday the party started at 9.30pm and ended at 1:30am.

On Friday we saw the group shows - you MUST check out the Rio Zouk Style student group show!

On Saturday it was time for the professional performances! The anticipated Freddy & Andressa's show premiere kick-started the shows and our hosts did a great job running the stage that night. All the shows were stunning to say the least! See them all: the sensual Bruno & Eglantine, the joyful Renata & Jorge, the dramatic Leo & Becky  and the crazy-fun-innovative Daniel & Leticia. The show time ended with speeches that brought tears to many eyes on and off the stage - it's quite exceptional to be a part of such a close-knit zouk family.

On Sunday we had a couple more great shows from Bruno & Eglantine as well an amateur performance by the Spiral Dancers team Ossi & Marcela.

I was really happy with the wide range of music played at the congress. Also the sound system was very good (in fact the venue is primarily designed for concerts), probably the best I've seen - pardon, heard - so far in zouk congresses. There was a clear majority of ladies in the parties; I hear this is typical in zouk events in Russia and perhaps the Russian influx shows in this way (and I say this in no offense to the talented Russian zouk ladies, many of which also lead). Though I would have liked to have danced more I have to conclude like many others that attended the event: quality wins over quantity every time. I will rather have a great venue, warm atmosphere, only top quality artists - most of them straight from Brazil - and mind-blowing dances, even if fewer of them. And here's tip for all the zouk guys around the world: an especially warm welcome to the next Helsinki Zouk Festival, you most certainly won't be disappointed!

Zouk has come a long way in Europe in the past couple year - and no less in Finland. Though the Finnish scene is still on the small side the level of dancing is very high and the Finns take great pride in that. There's a big number of new beginners now and I hope to see them get hooked to zouk like I did in 2011 and develop into wonderful dancers. This event was the result of the hard work of Freddy and Andressa who have catapulted into zouk stardom during the past years - no wonder to their students :) In addition to the great work that they do I know also that there are many dancers in the zouk scene in Finland that keep traveling the world and luring top zoukers from all over the world to come visit and dance with us. We're all overjoyed to be a part of this "FinZouk" team!

I zouk you too! Find this shirt and more zouk clothes in my shop!