It was one of those once-in-a-lifetime moments. You sit face to face with a true legend of your #1 passion in life and hear them open their heart and share their life story. That was me last month, sitting face to face with a certain tall and dark gentleman. And now I get to share this story with you: my interview with Braz Dos Santos.

In case you don’t know Braz yet, he is indeed a living legend of Brazilian zouk and probably one of the reasons why we are dancing this dance still today. He started his dance career 28 years ago by winning a lambada competition on his first night on the dance floor. Leaving his perilous life as a fisherman he soon went on to be a dancer with the iconic Kaoma band. Still today he is dancing and teaching, and is probably as energetic & joyful as he was 28 year ago.

Last year, the colorful story of Braz’s life was brought to stage in a dance & musical show Brazouka.

Zouk The World: Let’s talk about Brazouka! I'm curious to know what was the most memorable moment for you on the Brazouka tour?

Braz Dos Santos: There were several because it is a new challenge. I’m acting, dancing, doing capoeira and all of it at the same time. I learned all this during my life - I've been always learning, little by little, whenever I had the opportunity to learn from someone; some of it on the street, some in the capoeira school and in the samba school. Brazouka tells my true story - everything that happened to me.

ZTW: I heard that Brazouka was very well received by the audience - What was the audience like - young people, older people, other dancers...?

Braz: When we opened Brazouka in Scotland, at the Fringe Festival in Edinburgh we were in front of an audience that had no idea what they were about to see. The audience was quite mixed; there were lots of young and old people. Mainly the people who came to see Brazouka had never seen this type of show on stage. So people entered the theater with curiosity "let's see what they want to show us," not knowing what they will encounter. At the end everyone is clapping, smiling, dancing and doing the movements of the show. So it was a wonderful premier. Then on the second day it was the same reaction from the audience, and it was like that after each show. I'm very happy that Brazouka was so well received. 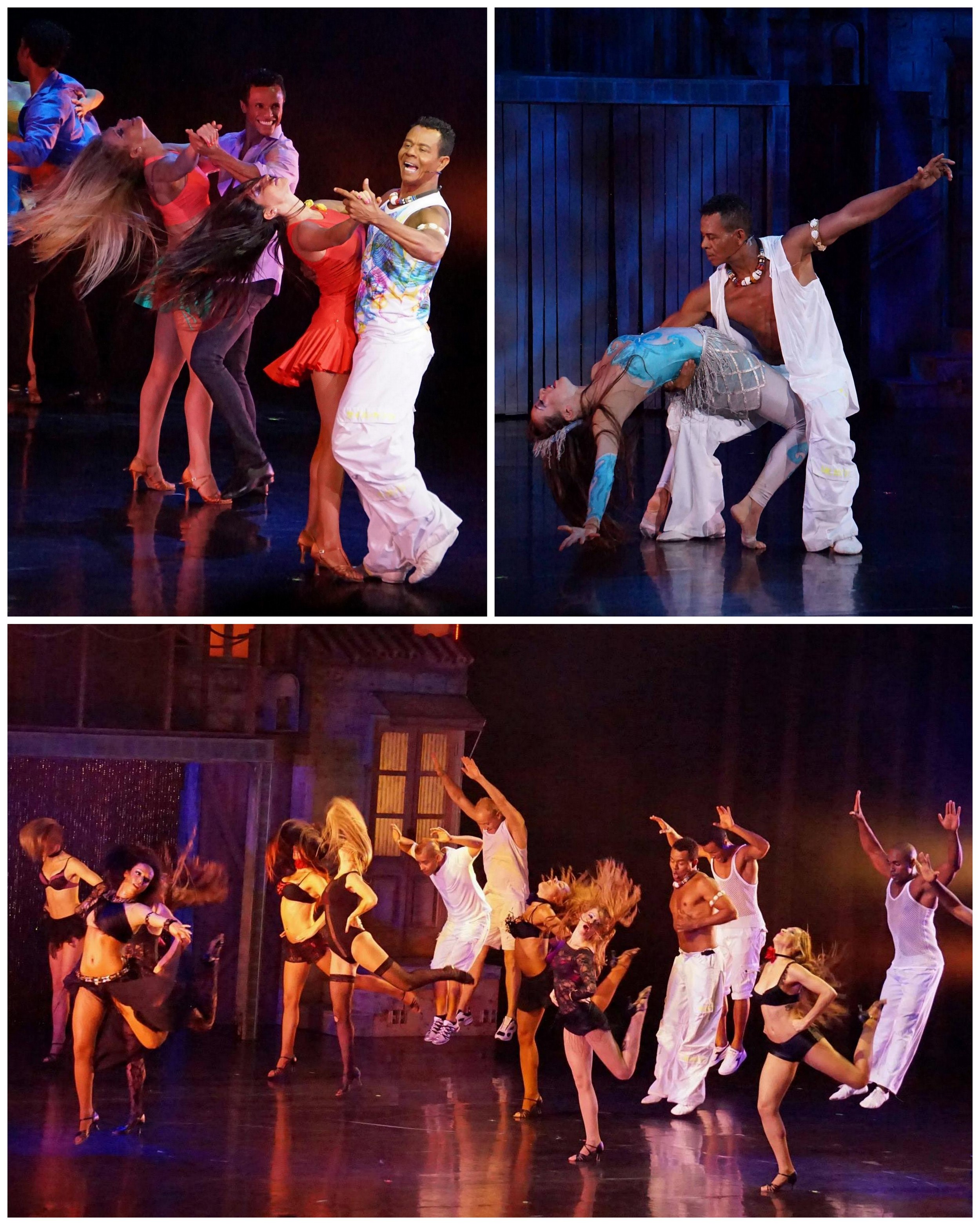 Moments from the brazouka show! photos by Rachel Findlay Moreira.

ZTW: Do you have some special memories from your interaction with the audience?

Braz: Yes I do. Mostly these are moments that came very naturally. Like hearing person sneezing in the audience and I would say "bless you" in the middle of the act as if it was my line in the script! Another time in Sydney it was over 45 degrees for sure, and there’s a part where we talk about arriving to Brazil when it’s 38 degrees. So I walk very close to the public and say  "just like here today" - and everyone was laughing. Just these natural things that weren’t written, coming from my heart.

One the strongest smiles we got on the stage of Brazouka was during a segment about football. Actually, the name Brazouka comes from two things. “Bra-” from Braz and “-zouka” from zouk. But Brazouka was also the name of the ball of the World Cup last year. As we know, Brazil lost to Germany 7-1 and that ended the Cup for Brazil. But we took this with a good attitude. For us it is a great pleasure to have joy in our lives. If you ask is the intention of Brazouka to be the best show in the world? No it's not. In stead we want to deliver a message of joy. We want people who come to see the show to leave saying "I want to go to Brazil, I wanna dance!!” or maybe “I want to fall in love". Brazouka gives a lot of things to aspire to. And to me, Brazouka is a big family.

ZTW: The zouk community is known for international collaboration - now you have a chance to address the zoukers around the world; how would you like dances around the world get involved with Brazouka?

Braz: It’s very easy to get involved. What I’d like to see is intention, respect and intelligence. Above all we need intelligence, to be able to open the mind and the heart. I’m not saying that Brazouka is a better show than any other show, a lambada show, zouk or capoeira show - no. Brazouka is a show about Brazilian culture. It tells a story of a Brazilian boy from Porto Seguro who was born in the land where lambada was born, that practiced capoeira, that didn’t go to school because he had to start working at a young age to help his mother and his family - having eleven brothers and sisters.

Did I want to be a good dancer? No. I was a fisherman who almost died at sea. I asked God to get to me to land and to never have to return to work at sea anymore. When I finally got back to port in Porto Seguro after 10-12 hours of hardship, I met some people that asked me to come to a party. I didn’t know anything about this party but I decided to go. When I arrived, there were people dancing lambada - but what was this dance, I had no idea. It was in fact a lambada competition they were doing. So I walked to a girl and said "let's dance"! Ok, let’s do it. And I won the competition. This was 28 years ago. And in Brazouka we tell this true story, my story.

ZTW: I’ve been reading about your long career which is quite historical in terms of zouk - like you said it started already 28 years ago, during the days of Kaoma. Certainly the years do not show in you. You seem quite young physically and in your spirit. Do you believe that dance and joy have contributed to your youthfulness?

Braz: Certainly. Because dance is a massage to the spirit.

ZTW: And your spirit is well massaged?

Braz: My spirit has received many massages: a smile massages the spirit, dance, joy and desire to live massage the spirit. Believing that someone created all the wonders of the world, the light, the sea, the sky, the plants, the children, the old people... all natural and simple things massage the spirit. And I love them all. Dance is in the core of all of this; meeting people, having contact with people, feeling an emotion, having a tasty dance or experiencing an attraction. I think that dance holds a very strong force.

ZTW: What does Lambazouk mean or symbolize to you?

Braz: To be clear, during these past 28 years since I won that competition I’ve never changed my style or my way of dancing. Surely I have adapted it with elements from dances that came along that I liked. All forms of dance that people call zouk, lambazouk or lambada, no matter the name I love all of them. Like a tasty feijoada, with various ingredients, so is lambazouk; put in a little samba de gafieira, a little salsa, some sauce, some salt and sugar - this mixture is what dancing is about. I prefer not to label the style that I dance.

ZTW: Among other things, you are well known for your strong clap that bring a lot of energy to people, where ever you are. What is the secret or the story behind the clap?

Braz: Africans brought many things to Brazil, to Bahia; Music, dance, capoeira. The big ‘bumbum’ that many Brazilians have. Joy and the big smile. Many things very typical in Bahia are also very African.

The clapping is something you do in candomblé, in capoeira, and among other things in lambada. Before it was mostly only in rodas. But nowadays, anytime when you’re not dancing yourself and you clap your hands, you’re passing the rhythm to your body and sending an energy. It sends a positive message. It wakes you up when you’re tired, on the second or third day of the congress. When I’m at a party I always try to think that I will enjoy it as if it were the first or last, always. And this is the kind of joy we try to bring to the stage in Brazouka. 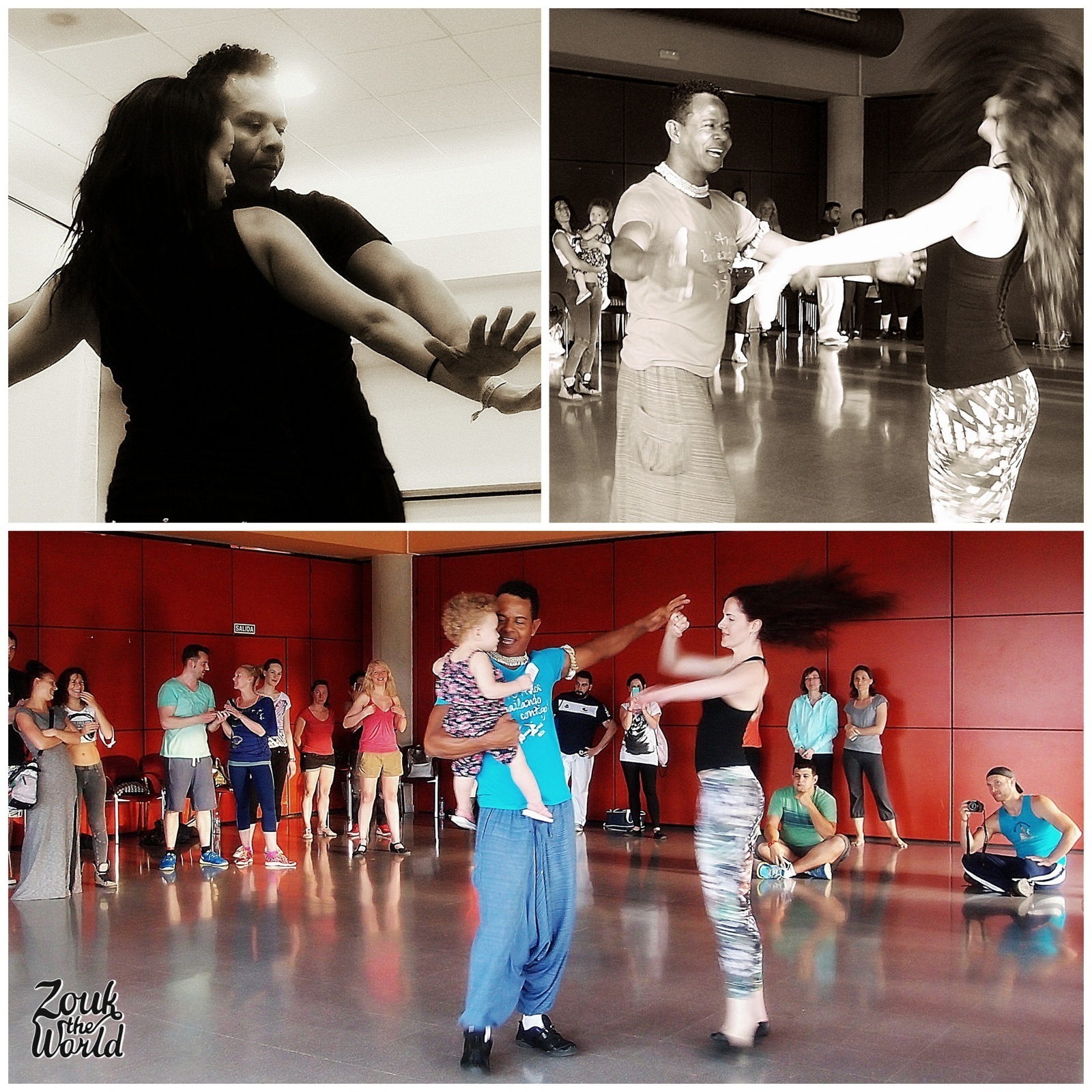 Braz sharing his joy to dancers around the world

Braz Dos Santos was born in Porto Seguro, Bahia, Brazil. Bahia is considered to be the heart of Brazil and where much of the Brazilian culture was born, including lambada. Like many Brazilian children, Braz started working at a young age, helping to support his large family. He became a fisherman, facing the dangerous and unpredictable ocean daily. During one of those fishing trips Braz had a brush with death and prayed to God to save his life and give him a another way of making a living.

Soon after, Braz was invited to be a dancer with Kaoma, a pop group set up by a French entrepreneur who was impressed by the lambada dance and music he saw in Porto Seguro. Braz and his brother Didi toured the world with Kaoma in 1988-1993, developing lambada and spreading its infectious joy and energy. After Kaoma stopped performing, Braz and Didi continued to teach lambada around the world.

Over the years both the dance, lambada (now lambazouk), and the music, zouk, continued developing and transforming. Braz & Didi’s unique dance style is firmly grounded in the original lambada from Porto Seguro with its beauty of movement reflecting the rhythm of zouk. Braz continues to share his knowledge of lambazouk with his openness, friendly approach and joy of living.

In the past year, the story of Braz’s life was brought to stage with Brazouka, a dance and music show headed by none other than Braz himself. Brazouka was written by Pamela Stephenson-Connolly, directed by Arlene Phillips, with narration by Billy Connolly and music by Gil Semedo. Brazouka toured during 2014-2015 in the UK, South Africa and Australia. Brazouka is set to continue its tour with new shows in 2016.

Braz and his brother Didi will also host a new zouk & lambada event in their home town of Porto Seguro, Brazil this coming New Year, 31 December 2015 - 8 January 2016; the Brazouka Beach Festival! You can join the dancers of Brazouka for 8 days of workshop and 9 nights of parties on the beautiful Bahian coast. The event will be centered around all styles of Brazilian zouk and will feature also samba de gafieira, kizomba and capoeira.

In case you missed it, see this video to get an idea!